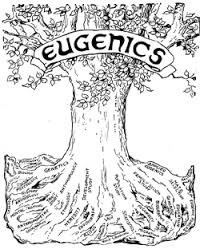 On Tuesday, Dr. Fritz finished up the segment on eugenics, which is the belief and practice that humans can improve the gene pool by advocating reproduction with those of “higher” traits and suppressing reproduction of those with “lower” traits.

It was fascinating to listen to Dr. Fritz condemn eugenics because how he approached the subject was quite different from how I would have coming from the Humanities. Whereas I might lead the discussion with emotional appeals for common decency and logical concerns about how one determines what is “better” or what “better” even means, Dr. Fritz condemned eugenics with a mathematical formula. That’s right: math.

He had the class imagine that we, as a country, were going to practice eugenics and kill anyone with PKU, which is one of the most common inherited diseases. Upon birth in a hospital, every newborn’s heel is pricked and tested for this disease.

To understand the mathematic formula, one needs to remember that it takes two genes for genetic diseases to manifest. In other words, you may have a recessive gene for PKU, but the recessive gene alone doesn’t give you symptoms. One in 12,000 people will have this disease, which is a frequency of .0000833. Dr. Fritz did the numbers and showed that if we kept killing the people who have the disease, it would take 1,000 generations to wipe it out.

So, set outside issues of morality. Set aside issues of feasibility such as who does the rounding up and how. Just logically, eugenics is not a feasible method to “improve” the population because of how recessive genes work. Everyone, absolutely everyone, has a predisposition for something. We have 25,000 pairs of genes in a single body. All of us have some mutations within that 25,000. In other words, as Dr. Fritz pointed out, if you want to suggest killing off the imperfect people, start with yourself.

A new poem by Charlotte can be found in Poetry!

“An astonishing accomplishment!” Sarah Giragosian reviews *Code* in the recent issue of 32Poems and beautifully articulates the merge of science and poetry.

Sharing a name with the previous Vice President’s daughter can create some interesting, and at times humorous, confusion. Charlotte turned some of the emails intended for the other Charlotte Pence into this “found poem” recently published in Your Impossible Voice.

More praise for Code keeps coming in the latest review by Rose Solari, who calls this book “complex and deeply intelligent.”

Code is featured as one of four “must-read” poetry titles by The Millions for July. “A book suffused with genuine optimism—without sentimentality.” –Nick Ripatrazone.

New review of Code in Sundress: “In a time wrecked by illness and grief, this book is a touching and hopeful look at the ways we can work to heal our bodies and minds through love and relationships.” –Sydney Peay

From Rumpus written by Edward Derby: “Code is a cave of catharsis in this time of grieving, as we reckon with both COVID-19 and with police brutality across America.”

Code has arrived and is now available for purchase. Read about why she wrote the book here.

Charlotte is excited to be included in the contemporary southern poetry anthology entitled Gracious, to be published next year by Texas Tech University Press.

Want to test your knowledge about inheritance and DNA? Take this quiz in form of a poem in the latest issue of Diagram: http://thediagram.com/19_2/pence.html

OLDER NEWS YOU  MAY HAVE MISSED:

Nursing in the early hours? Read Charlotte’s ”The Weight of the Sun” in Guernica.

Interview with Charlotte as a new editorial board member of Negative Capability Press.

A new essay titled “Reading Baldwin’s ‘Sonny’s Blues’ While Listening to the Band” is now out in the latest issue of Opossum, a journal that unites music and literature, complete with a 45 RPM in every issue.

Looking for Mike Pence’s daughter? (This Charlotte is not related to him.) Read this:
Charlotte Pence, Spike Pence’s Daughter: 5 Fast Facts You Need to Know