The poetry book that I’m currently writing focuses on three different types of non-verbal narratives: fossils, DNA, and pre-historic cave art. All of these elements contain information. And from information, we can’t help but to create stories.

When I was finalizing my plans to teach abroad in England for the fall semester, I was excited to do so not only because of all the developments in DNA that England has witnessed, but also because I would be close to France and Spain—and their caves.

In September, I went with my husband and four-year-old daughter to visit Monte del Castillo, a cone-shaped limestone mountain, in Spain. Inside this hill, or mountain, an intricate labyrinth of caves houses the oldest known cave art in Europe, except for the La Ferrassie Cave Cupules. This region is part of the Franco-Cantabrian Cave Art region where famous sites such as Altamira and Lascaux exist. While those two caves are closed to visitors, this area is open, but not in a consumerist way. There is neither a gift shop nor a deli–not even a picnic table. The parking lot is about a five-minute walk from the entrance, and the walk itself is lovely. This area of Spain is known as Green Spain as the mountains are covered with oak, birch, and fig trees that look down upon the patchwork of fields that are cornered off by red-roofed, white-walled homes. A village, Puente Viesgo, squats in the crook of the valley.

We walked through two of the caves here, the first being El Castillo. The entrance to the caves begins at a slim counter to collect tickets. A simple amphitheater-like roof has been braced to the side of the mountain. We collected our tickets and proceeded down a dimly lit ramp and man-made concrete steps to where the air became damp and the packed dirt floor slick with cave drippings. And then I realized the cave had begun.

What impressed was the size of the cave itself. I suppose I had imagined a den with art, something that a bear would have curved his back against throughout the years. But these caves are labyrinths upon labyrinths, up and down, circular and craggy, winding and straight. Whole houses could fit inside one smooth-floored cavern. The thing is, Cueva del Castillo is made up of about 20 of these huge caverns. The walls tended to be a café-con-leche brown, everything slightly shining from the dampness and the lights set up along the ground with what looked like an electrical cord.

The tour, all in Spanish and spoken quietly without inflection, lasted about an hour. Our daughter, Esmé, was the only child on the tour. And in all honesty, it wasn’t the best place for a kid: dark, chilly, slippery, punctuated only by a flashlight gliding along the wall. She stayed quiet, holding tight, wiggly when we would stop to stare at a black outline of a bison, horse, or deer. The words–cola, lomo, piernas–became a sort of litany as the guide would point out a tail, a back, the legs of a creature we would have otherwise overlooked as scratches or shadows.

The drawings themselves one has seen before, so I don’t know if I need to describe. But what impressed me was how the drawings are three-dimensional; the artists embraced the colors of the rock, the shape of the rock wall, the notches and depressions to help create movement and contours with the animals.

About halfway through the first cave, we came across the famous image of the brick-red, spray-painted hand. This one, though, was a child’s hand. The only child’s hand in all the caves. Archeologists speculate that these handprints are created by scraping the rock clean, placing the hand on the surface, and then dipping a hollow bird bone into a paint container such as a sea shell. The artist would then blow the paint over his hand, creating the outline. 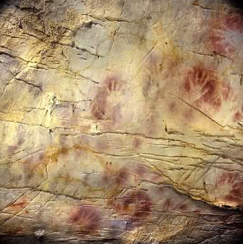 The only child’s hand in all the cave, our guide continued, speculating as to why the art even exists: shamanism, emergence of symbolic thought that makes us us, hopeful communication to someone else….

“Why Esmé?” I asked, leaning in, expecting to hear something magical, something wise, something that no scientist–

“Because he was sooooo bored to be in here.”

Las Monedas, the longest cavern in this area (800 meters with only 160 that can be visited) was next. There wasn’t a lot of cave art and much was located around one area. What impressed was the cave itself: a spectacle of stalactites, stalagmites, columns and colored karst formations. I loved most the built-up calcium carbonate deposits that are a milk-colored glitter. Otherworldly. In total are seventeen animal figures: horses, reindeer, goats, bison and a bear.

The drawing that stood out the most was a depiction of a horse. It was not as shaded or detailed as others in the area—but maybe it had once been. I was attracted to how the wall was part of the animal’s shape. The artist had used the walls’ natural curves to create the horse’s bank and flank. The black charcoal line simply followed the wave the rock created and then the artist had extended beyond the back to create the neck and face of the horse.

Like most of the figures drawn, the animal was in motion. I also couldn’t help but notice how the figures themselves were rarely centered on the walls. Everything was slanted. Often another drawing was a few feet away but pointing in another direction, again slanted. Maybe they were once straight, but the cave walls themselves have moved. The placement also made me wonder if the artists revered their work the same as we do now where museums isolate each creation with layers of mat and frames.

I left Las Cuevas de las Monedas thinking of that horse flank and saw in the field below me a horse, and another, and another. A cowbell echoed. A hawk screeched. Since I had been in the cave, the sunny day had turned hazy, and I walked now inside a cloud as a I made my way down to the parking lot, thinking about all the figures I had seen, including a five-pointed star—a shape that always gave me fits in elementary school. An odd shape, really, as the stars don’t really look like that. But here we had the same shape from 40,000 years ago being sketched.

As I walked back down, I also wondered about why there are rarely people in the art—here or anywhere else. It’s estimated that only 2% of drawings are of the human form, and then they are merged with that of another animal, such as the famous drawing of a woman and bull, an image repeated years later in literature with Europa and the sacred bull. I cannot help but feel as if the reason is connected to the growth of art as individualistic expression versus communal recollection. Poetry, novels—they have both moved in those directions across time from poetry of the troubadour age to poetry of self-expression. In the British history class I’m taking now with my students, we keep seeing art used by royalty as a way to impose narratives, to suggest one is god-like or that one’s powers are deserved as evidenced by the battle won and depicted by the angels singing around one’s head.

Thinking about all of this, I couldn’t shake Esmé’s question from earlier in the day when we were playing on the beach; she asked “What makes me alive? Me me. You you. Daddy Daddy.” There are really three questions there: Why do I exist? How did I come to be this being that I conceive of as myself? And what makes me distinct from you?

“An astonishing accomplishment!” Sarah Giragosian reviews *Code* in the recent issue of 32Poems and beautifully articulates the merge of science and poetry.

Sharing a name with the previous Vice President’s daughter can create some interesting, and at times humorous, confusion. Charlotte turned some of the emails intended for the other Charlotte Pence into this “found poem” recently published in Your Impossible Voice.

More praise for Code keeps coming in the latest review by Rose Solari, who calls this book “complex and deeply intelligent.”

Code is featured as one of four “must-read” poetry titles by The Millions for July. “A book suffused with genuine optimism—without sentimentality.” –Nick Ripatrazone.

New review of Code in Sundress: “In a time wrecked by illness and grief, this book is a touching and hopeful look at the ways we can work to heal our bodies and minds through love and relationships.” –Sydney Peay

From Rumpus written by Edward Derby: “Code is a cave of catharsis in this time of grieving, as we reckon with both COVID-19 and with police brutality across America.”

Code has arrived and is now available for purchase. Read about why she wrote the book here.

Charlotte is excited to be included in the contemporary southern poetry anthology entitled Gracious, to be published next year by Texas Tech University Press.

Want to test your knowledge about inheritance and DNA? Take this quiz in form of a poem in the latest issue of Diagram: http://thediagram.com/19_2/pence.html

OLDER NEWS YOU  MAY HAVE MISSED:

Nursing in the early hours? Read Charlotte’s ”The Weight of the Sun” in Guernica.

Interview with Charlotte as a new editorial board member of Negative Capability Press.

A new essay titled “Reading Baldwin’s ‘Sonny’s Blues’ While Listening to the Band” is now out in the latest issue of Opossum, a journal that unites music and literature, complete with a 45 RPM in every issue.

Looking for Mike Pence’s daughter? (This Charlotte is not related to him.) Read this:
Charlotte Pence, Spike Pence’s Daughter: 5 Fast Facts You Need to Know